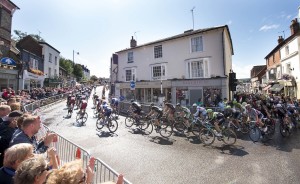 Quite a few Wheelers were in London for the Prudential Ride London last weekend. 4 of us entered via the club team route. Not knowing how this worked we submitted various estimates for our times. Unfortunately this meant we started last as one of us said 8 1/2 hours (still not sure which of us it was). So, at 8.54am we started on the 100 mile loop front the Olympic Park alongside event organiser Dave Brasher.

Still not realising how the start times were determined we were surprised to find ourselves making the pace in our wave and within 1/2 a mile overtaking the previous wave. We realised something was slightly odd when we overtook the wave previous to them before entering the Limehouse Link!

One of our team exploded his front wheel on a pot hole coming into the City and had to ride the remaining 95 miles with no front brake.

The joy of overtaking the previous waves turned into frustration as the streets got narrower and the congestion increased. It was getting quite dangerous as we filtered through very inexperienced riders.

Riding famous London streets with no traffic other than bikes was a fantastic experience. There were plenty of crowds out cheering the cyclists on.

We couldn’t help but feel that the event was over-organised. Flanders and the Maratona are not much smaller but have a much better approach to feed stations. The station at Newlands Corner took 20 minutes to get through as marshals insisted riders walked several hundred metres around a car park. It was also a shame that the only food was gels, bananas and fig biscuits.

Still, the ride back from Surrey and Box Hill through Kingston, Wimbledon and Chelsea was well worth the dodgy stomachs. Entering the Mall and being cheered on to the finish added something else to the ride.

On the whole it was a ride worth doing and now we know how they work out the start times we will make sure we give better estimates next year.