2010 was a landmark for Rye & District Wheelers in that it marked the tenth anniversary of the Club reforming in 2000. A new kit design was therefore adopted to commemorate this anniversary whilst celebrating the Wheelers’ long and illustrious history as arguably the first cycling club ever formed. Never wanting to stand still some design tweaks have taken place for 2016, wait till you get your new kit and see if you can see the changes. 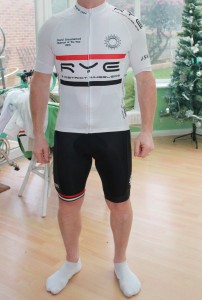